skip to main | skip to sidebar

Room Update – Almost done! Yeah! Ordered some bookcases for organization and there was a mixup on one of them. It should be in this week and hopefully this weekend I will get all the toys back in. I came up with a clever way (ingenious was the word I originally picked but I want to appear modest)to hang Miss M’s tent flaps. Extra long shower curtain rod. Found some really cute hooks and then all I have to do is put some grommets in, assuming that would be easier to figure out than my button hole maker on my sewing machine. I’m hoping to have the tent curtains done by this weekend too. We’ll see. 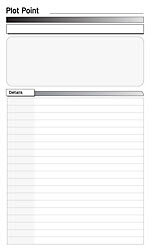 Writing – I finished the plotting class. I have to be honest, I really already had L&D1 plotted out to the point where I didn’t need the class. But it did help me adjust my thinking for future works. All in all, it was a worthwhile class to take and I recommend it to anyone doubting their plotting abilities.


So now that I’ve finished the class I’m fine tuning my outline for L&D1. I’m giving myself two weeks for last minute detail stuff and I’m going to try and start writing in earnest by Easter.
Posted by Dani at 12:10 PM 2 comments:

The room is coming along great. Finished all the painting. YEAH!!! Man, I’m tired of paint. There are a few spots on the ceiling I need to cover up but I have to be honest, I’m not all that ambitious to get it fixed. Had the carpets cleaned Wednesday, and the bed delivered Thursday. Miss M is in heaven. I can’t get her off the bed. 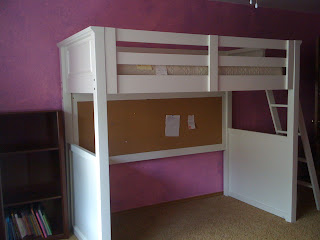 We still have the HUGE pile of toys in the living room but hopefully we can get through half of those this weekend. I ordered some bookcases to help organize her toys, but I waited too late and they won’t be in until next week. So by next weekend I hope to have it finished. Maybe that will be my birthday present to hubby, “Look honey, I cleaned the living room”.

My mother in law is here this week and I haven’t been able to get much accomplished on L&D1. I’m going to try and work on my plotting class tonight but we’ll see. I have like 2,000 emails in my boxes from all the different groups I’m in and classes I’ve taken over the past few months. A couple of classes I took I just filed away to read later. I’d like to get through at least two of those by the middle of next month. Again, we’ll see.

Anyone reading anything interesting? I picked up the new Lora Leigh but I’m not letting myself read it until I get some of this stuff done. A reward for my hard work. I know someone else that does that, do any of you?
Posted by Dani at 8:32 PM 2 comments:

Writing update – I’ve worked through more of my outline. I’m about two thirds to a little more through it and very happy. Most of the ending is already worked out with a couple of small questions that will have to wait until the end.

Right now, the only thing that really needs tweaking is the romantic element. I realized this week that most of the romances that I’ve read lately have been where the hero and heroine are sequestered in some way. You know, where they are on the run, undercover together, Personal Protection, (wink, wink to Leah) etc. In my story, they are dating. And boy, do I NOT know anything about that. I’ve been with DH for nearly 18 years now and even before then I was an anomaly when it came to the whole dating scene. Let’s just say that my attitude was way more like a guy’s. If I liked someone, I asked them out. I didn’t wait, I didn’t ask to be pursued, I saw what I wanted and went after it. My single friends don’t even bother anymore asking me for advice on men. I’m way too aggressive and direct for them. I don’t get the games. Don’t believe me? When DH and I went out for the first time, he refused to take me. I badgered him for 20 minutes until he relented and agreed to take me out. The only reason he put up such a fight was because I was fresh out of high school and he was 8 years older than me. Not such a big deal now, but back then it was. As it would be for Miss M to show up with a boyfriend 8 years older than her! Hypocritical, yeah probably, but I don’t care!

Miss M’s room – It’s all primed and ready for pink paint. We discussed, compared, argued and drew pictures to come up with ‘our plan’. Miss M is so like me it’s a bit frightening. We argue constantly, it’s all about control. Anyway, we decided to paint the walls pink and then we picked out purple paint to sponge on top of that. So she’ll get a multi colored effect. The colors are rich but not too dark or too pastel so it was a good compromise for us both. I sure as hell hope it looks as good as we imagined. Dad will be mad at both of us if we hate it so much we start over. I’m not sure why though, he hasn’t done any painting. I promised Miss M that she could help paint the walls pink so that will be this afternoon or tomorrow. We’ll see how it goes…
Posted by Dani at 10:03 AM 2 comments:

While I’m still working away to finish out the plotting on L&D 1 I’ve come up with another project, Miss M’s room. When we moved into the house we are in now she had just turned 4 and still very wrapped up in the Disney stuff. So we painted a huge Ariel mural on the wall for her.

She was very nervous about the whole giving up her old house and this was something for her to be excited about, plus her new room was about half the size as her old one. Now don’t get upset, when she is in the neighborhood of 10-12 she’ll move into one of the two rooms upstairs and you can’t believe how big they are. Some apartments I’ve lived in were smaller.

She’s 6 ½ now and for about a year she has grown tired of the Ariel theme. Still loves the character, but doesn’t really want to live with her anymore. Daddy is not too pleased, but then they argue weekly about the fact that she has to quit growing. Her response comes very dry, “But Daddy, that’s my job. I’m supposed to get bigger.” There is almost the undertone of, “Deal with it Dad” included.

So this week I’ve been scouring the internet for ideas on bigger girl, not tween, rooms. Last night we bought a bunk/ loft bed. 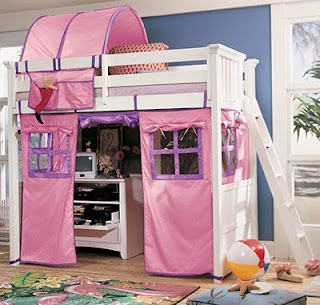 The bed is up top and the bottom is open. You could put another bed there, but we aren’t. We are going to use the space for the insane amount of toys this one child has. Hopefully we’ll be able to sort through and donate some of them. This should double the play area space. We bought some fabric last night and I’m going to make tent flaps to hang down so she’ll have her own little cave under the bed.

So what does all this prove? Other than I’m crazy to take a project like this one, oh did I mention I gave myself only two weeks to get the toys sorted, walls primed and painted before the bed arrives? And on top of all the other crazy things I have to do every night, plus my real job. Plus, while we're at it, I'll have to redo the bathroom downstairs too. It's all in the Ariel theme as well. Maybe it’s one of those things that you put in front of yourself so you never finish another project. I admit I’m very bad about doing that. But I don’t think so this time. See this morning in the shower I was thinking about L&D1 and decided that part of my problem was in Kathleen’s love interest. While he was cute, he just wasn’t doing it for me. Came up with another actor and WHAM, got a whole lot more to work with and I can see it playing so much better now. Maybe I just needed another outlet for my creativity to get the rest of the wheels going.

Have any of you had similar experience when stuck on a plot?
Posted by Dani at 8:02 AM 2 comments: